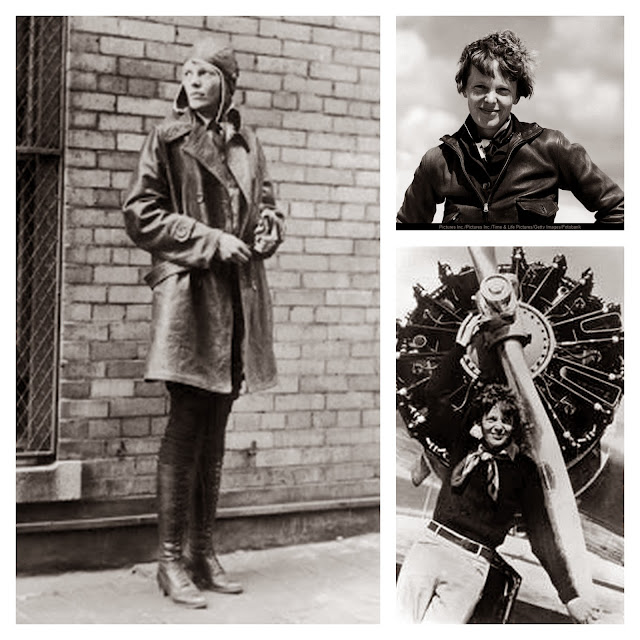 Best known for being the first female aviator to fly solo across the Atlantic Ocean. Amelia Earhart (1897-1937) is America’s most famous female pilot. Born in Atchison, Kansas on July 24th to Edwin (a lawyer) and Amy Earhart (daughter of a wealthy judge).

Amelia was eleven-years old in 1908 when she saw her first airplane. She wrote that…”It was a thing of rusty wire and wood…not at all interesting.” Later in 1921, Amelia had her first flying lesson. She said, “As soon as I left the ground, I knew I myself had to fly.”

Before she was lost, Amelia wrote to her husband, “I am quite aware of the hazards…I want to do it. Women must try to do things as men have tried. When they fail, their failures must be but a challenge to others.”

There have been many theories about Amelia’s disappearance…that she was on a secret mission for the United States government to spy on Pacific islands held by the Japanese, that she was held a prisoner of the Japanese until after WWII and brought back in secret to the United States, that Amelia and her navigator, Fred Noonan, lived as a cast-aways on Nikumaroro island. No one knows for sure…the search for Amelia and Fred will continue in 2014.

1. Amelia’s mother was the first woman to climb to the top of 14,110 foot high Pike’s Peak in Colorado.

2. Ameila became a nurse’s aide in Toronto, Ontario, Canada when she visited her sister, Muriel who was in school there. Some of the men she cared for were pilots.

3. In 1926, she was a social worker at Denison House in Boston. She taught English to immigrant children.

4. She bought her first airplane, the Canary, for her birthday. She paid for lessons and the yellow airplane with money she earned working for the Los Angeles telephone company and with money given and loaned to her by her mother and sister Muriel.

Amelia continues to inspire young girls to dream…including my daughter who chose Amelia Earhart for her “Famous American” report. Amelia said, “To enjoy doing something, to concentrate all your energy on it–that is not only the surest guarantee of its success. It is also being true to yourself.”

After all, if we truly want to inspire our youth to have success, isn’t that one of the best messages we can give?