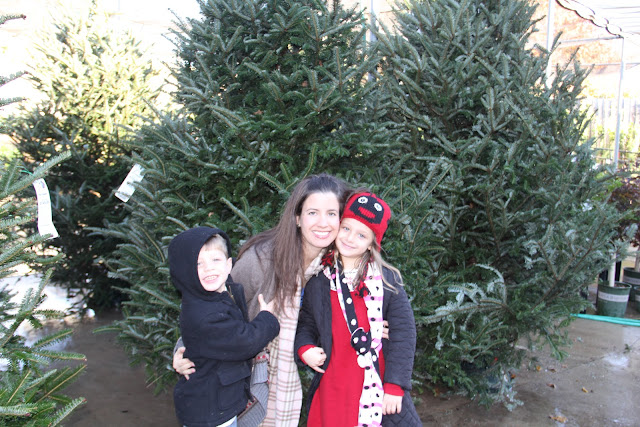 SUNDAY is family day…the day before going back to work/school…the day we do everything together. This Sunday, it included picking out our Christmas tree. This annual holiday tradition conjures up many happy memories of picking out a real Christmas tree in years past.

My children (six and four) are in the back seat singing the Vince Guaraldi Trio version of O Tannanbalm…O Christmas Tree, O Christmas tree, How lovely are your branches! My husband in the front seat is not thrilled that I broke out Charlie Brown this early in the holiday season (I have a slight obsession with Vince Guaraldi’s music and listen to it more than what is probably normal).

There are certain things that I really, really want every holiday season and a real Christmas tree is first on the list…next in line among my mom’s crown roast for Christmas Eve dinner, baking Christmas cookies, and attending Christmas mass.﻿

﻿Growing up, my family adopted my Dad’s Christmas tradition of snowing our own real tree with Ivory Snow. This tradition started out nice until my mom was always the last one standing decorating solo. My Dad and my brother and sister and I would suddenly reappear after my mom had completed about 90% of the tree by herself.

Out of the seven popular Christmas trees to choose from (Scotch Pine, Douglas Fir, Noble Fir, White Pine, Balsam Fir, Fraser Fir and White Spruce), we almost always choose the Fraser Fir because they have thick branches to handle lots of ornaments and that lovely fresh pine smell.

The story of how the Christmas tree came about starts with the German, Martin Luther, who was on his way home one night when he was struck by the sight of stars shining through the branches of a fir tree. He cut one down and dragged it home to decorate it with candles trying to emulate the sight for his family.

The tradition was later brought to England in 1846 by Prince Consort Albert, the German husband of Queen Victoria who was very fashionable…so the Christmas tree became a stylish tradition not only in England but America too.

The Rockefeller Center Christmas Tree is a world-wide symbol of the beginning of the holidays. It will be lit Wednesday, November 28 and decorated with more than 30,000 multi-colored lights and crowned by a Swarovski star. We’ll be watching it at home on NBC from 7-9. ﻿﻿